When we decided to write a book together about the history and impact of NCI-designated cancer centers since passage of the 1971 National Cancer Act, we both agreed that one of the first people we would interview was Joe Simone.

We had each known Joe for several decades, and his experience and reputation as a giant of oncology, his leadership in oncology quality assurance, and his role in the evolution and development of a number of NCI-designated cancer centers, made Joe a natural “go to” expert when researching the history of these centers.

So, when we began writing “Centers of the Cancer Universe: A Half-Century of Progress Against Cancer” in mid-2019 (due to be released this fall), Skip Trump jumped on a plane to meet with Joe in person.

This was planned to be the first of many face-to-face interviews but turned out to be our only one thanks to the travel restrictions instituted during the coming COVID-19 pandemic.

Joe appears prominently throughout our book.

It’s ironic that shortly after we submitted our final manuscript to our publisher, Rowman & Littlefield, in early January 2021, we learned of Joe’s death.

Years ago, Eric Rosenthal had quoted Skip in an article as saying, “When you’ve seen one cancer center, you’ve seen one cancer,” without realizing that Skip was quoting Joe. It’s universally acknowledged that the phrase speaks volumes about what we learned was the singularity of so many centers.

Joe was a genuinely nice guy who we knew would be interested in the project, and if not for his failing memory, we would have been able to consult him many more times about the early days of cancer center formation and the “oncopolitics” involved.

During Skip’s conversation with Joe, he distinctly pointed out that the proudest achievement of his long and illustrious career was the role he had played in the studies at St. Jude Children’s Research Hospital that led to the cure of childhood leukemia–and he had noted this to many others over the years.

When Skip met with Joe and his wife Pat, a nurse and steadfast partner during Joe’s long career, she made a poignant observation regarding some of the challenges faced by the early clinical researchers working on leukemia. She noted how upset she became when hearing comments made by some of her husband’s colleagues during national medical meetings. These physicians said that Joe and others using chemotherapy on children were “poisoning” them and suggested that their work was “hopeless.”

But Joe and his colleagues were vindicated as they clearly established that pediatric acute lymphocytic leukemia was, in fact, curable, and the principles of cancer care and therapy that they and others developed formed the foundation for the advances in cancer therapy that were to come.

Joe trained first as an internist and then a pediatrician and pediatric hematologist in the days before oncology-specific specialties existed.

Following training at the Stritch School of Medicine of Loyola University Chicago, Presbyterian-St. Luke’s Hospital and University of Illinois in Chicago, he joined St. Jude in 1967, noting in an interview for the ASCO Daily News in 2010:

“The institution [St. Jude] had just opened …, and they were trying to develop better treatments for children with leukemia. With guidance from our mentor there, Dr. Donald Pinkel, our research team was the first to say this was a curable disease, at least in some patients. And you can’t top that—that’s the best you can do in any career.”

Interestingly, the Stritch School of Medicine was named for Cardinal Samuel A. Stritch, who is credited with urging his former parishioner, entertainer Danny Thomas to locate the institution he founded, St. Jude Children’s Research Hospital in Memphis.

Many of the cancer center leaders we interviewed recalled with fondness and appreciation the advice, mentorship and friendship that Joe provided to them.

Simone’s cautionary note that every cancer center has its own ethos, culture and environment is also often repeated at cancer center external advisory boards whenever an individual advisor extols the virtues of “how we do it at our center.”

Joe is also credited with helping to develop improved quality and outcomes for cancer care through the American Society of Clinical Oncology’s Quality Oncology Practice Initiative (QOPI), which is now a designation sought by most oncology practices in the United States.

He was the author of many papers and essays, the latter collected in his book, “Sustaining the Dignity and Nobility of Medical Care,” Editorial Rx Press Orange Park, FL. 2007.

While Joe’s quote about the uniqueness of every cancer may be his most repeated saying, his observation in his “Maxims” article that “Institutions don’t love you back,” has proven, unfortunately, to be true too many times.

In 1996 Joe was appointed founding clinical director and Jon M. Huntsman Professor of Clinical Oncology, professor of pediatrics and medicine at the University of Utah School of Medicine, and executive director of Huntsman Cancer Care Programs.

He served in that position until June 2000, when he retired and founded Simone Consulting. In this capacity, he was able to advise a number of established and aspiring NCI-designated cancer centers, including the University of Florida Shands Cancer Center, where he served an advisor, director pro tem, and physician-in-chief of cancer services from 2008 to 2009.

Sadly, the last few years had burdened Joe, his wife Pat and their daughters, Margaret, Pat, and Julie, with Joe’s struggles with increasing memory loss.

Joe and Pat had moved to suburban Atlanta to be nearer to his daughters and grandchildren. Joe and Pat celebrated their 60th wedding anniversary on May 28, 2020.

Dementia and COVID-19 caught up with Joe on Jan. 21, 2021. Those of us privileged to know Joe mourn his loss and the cancer care and research communities, and Joe’s many mentees are the lesser for his passing.

Trump retired from his position as founding CEO and executive director of The Inova Schar Cancer Institute in the Inova Health System, Fairfax, VA. While at Inova he was also a professor of medicine in the cancer center at the University of Virginia. During his career, Trump worked as a GU medical oncologist and held leadership positions at several NCI-designated cancer centers, most recently CEO and president of the Roswell Park Cancer Institute (2007-2014).

Rosenthal is an independent medical journalist who has covered issues, controversies and trends in oncology for more than three decades.

Their book, “Centers of the Cancer Universe: A Half-Century of Progress Against Cancer,” will be published by Rowman & Littlefield this fall in time for the 50th anniversary of the 1971 National Cancer Act. 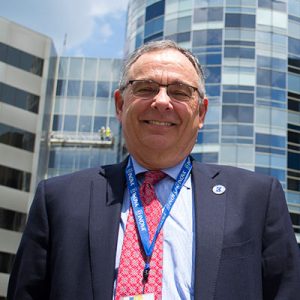