The National Clinical Trials Network has received a $20 million funding increase from NCI in the latest awards cycle—from $151 million to $171 million.

The network, which is funded every six years, now has 32 Lead Academic Participating Sites, up from 30 in 2014. The LAPS are academic research institutions with fellowship training programs, and most of the awardees are NCI-designated cancer centers.

To receive a LAPS award, sites had to demonstrate ability to enroll high numbers of patients in NCTN trials, as well as scientific leadership in the design and conduct of clinical trials.

The overall budget for NCTN is distributed to the various components of the network, which includes an Imaging and Radiation Oncology Core Group and Integrated Translational Science Awards.

The network, which provides the infrastructure for NCI-funded trials, annually enrolls up to 20,000 participants in cancer treatment and imaging trials.

The network groups, which consist of four adult groups, one group focused on childhood cancer, and one Canadian collaborating group, are:

Two institutions that were funded in the last granting cycle—Stanford University and Indiana University—are not included in the current list of 32 LAPS.

There are separate awards for the U.S.-based NCTN Operations Centers and their associated Groups’ Statistics and Data Management Centers.

Oversight of the NCTN, its organizational structure, funding, and long-term strategic direction, is under the purview of the Clinical Trials and Translational Research Advisory Committee. The federal advisory committee, which provides recommendations to the NCI director, is composed of clinical trials experts, industry representatives, and patient advocates from across the nation.

Membership in the individual NCTN groups is based on criteria that are specific to each group. Sites can belong to more than one group, and membership in at least one group allows a site to participate in the trials led by any NCTN group for which their investigators are qualified.

Researchers from the LAPS, NCI Community Oncology Research Program, other academic centers, community practices, and international members associated with the network groups may all enroll patients onto NCTN trials. Clinical trials led by NCTN groups may receive support from the IROC Group, ITSAs, and tissue banks, according to the scientific needs of the trials.

The U.S. groups are each funded through two separate awards—one to support network operations and another to support the Statistics and Data Management Centers:

The Network Operations and Statistical Centers for each NCTN group are geographically separate but work closely together. They are often located at an academic institution that has offered to “house” the group; however, in several cases, a center is located at a freestanding site that is funded via a nonprofit foundation. The only exception is the Canadian Collaborating Clinical Trials Network, which received a single award for its Operations and Statistical Center.

Higher levels of patient enrollment require a sustained level of data management work over several years, and the LAPS grants support the research staff required to manage this effort. The funds provided in the LAPS grants to cover this increased workload effectively raise the per-patient reimbursement level at the selected sites.

The LAPS awards also provide some funding for scientific and administrative leadership at the site itself, as the principal investigators at the site need to prioritize the clinical trials in which they participate, as well as educate and train staff at the sites in clinical research and develop strategies to promote patient enrollment.

Other investigators at community hospitals and medical centers can participate in NCTN trials, even if they are at sites that did not receive a LAPS award. These sites, as well as a number of international sites, either receive research reimbursement directly from one of the network groups with which they are affiliated, or they receive awards from the NCI Community Oncology Research Program. 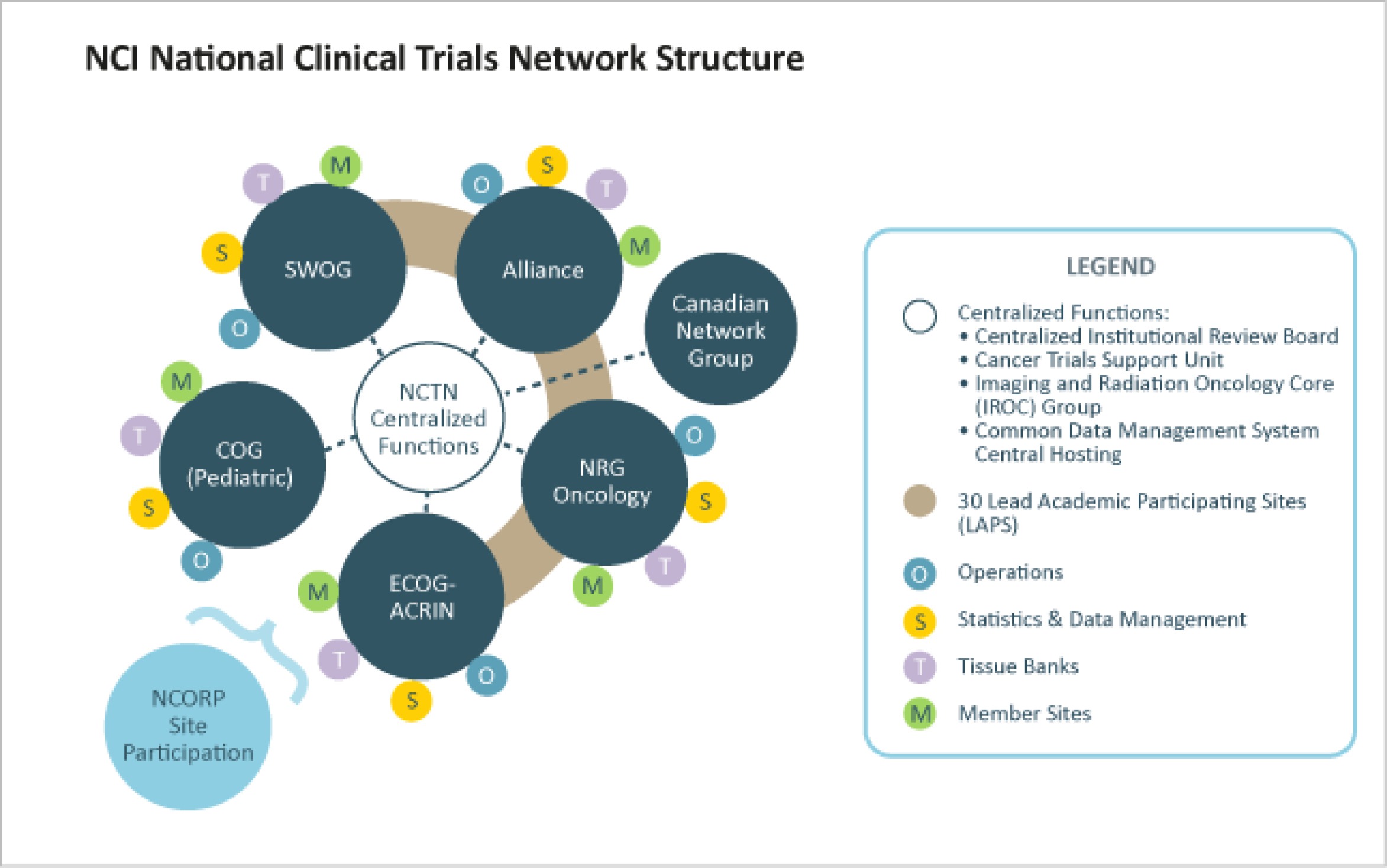 Site membership in the individual NCTN groups is based on criteria that are specific to each group. Sites conducting clinical trials can belong to more than one group, and membership in at least one group allows a site to participate in the trials led by any NCTN group for which their investigators are qualified.

Consequently, researchers from the LAPS, NCORP, other academic centers, community practices, and international members associated with the network groups may enroll patients into NCTN trials.

To help monitor and ensure quality in trials that involve new imaging modalities and radiation therapy, NCTN established an Imaging and Radiation Oncology Core Group that assists the NCTN groups that use these modalities in their trials.

The final component of the NCTN are the Integrated Translational Science Awards. The five academic institutions that received ITSAs include teams of translational scientists who use innovative genetic, proteomic, and imaging technologies to help identify and qualify potential predictive biomarkers of response to therapy that the network groups can incorporate into future clinical trials.

These awards are used to leverage work already underway in these investigators’ laboratories, often supported in part by other NCI grants, with the expectation that these researchers will help the network groups bring new laboratory discoveries into clinical trials.

These labs employ cutting-edge technologies that enable better characterization of tumors and help to identify changes in tumor biology in response to treatment that may help explain how treatment resistance can develop.

This cycle’s ITSA grantees are:

Each NCTN group also collects and stores tissue from patients in NCTN trials in a harmonized network of tissue banks. Standard protocols have been developed to ensure that the tissue collected is of the highest quality. Computerized records of the stored samples have important clinical details, such as the treatments received by the patients from whom the tissue was taken, treatment response, and patient outcome.

Participants in NCTN trials may also consent to the use of their tissue specimens for studies beyond the NCTN trial in which they are enrolled. The NCTN tissue bank program includes a web-based system that any researcher can use.

Researchers, including those who are not affiliated with the NCTN, can query the system about the availability of tissue that meets certain criteria and track the review and approval process of any requests to use samples.

The NCTN groups propose concepts for new clinical trials to the NCI Disease/Imaging Steering Committees. These committees are organized by NCI to evaluate and prioritize new clinical trials, and recommend to NCI those most likely to have the highest scientific and clinical impact.

Each committee is led by nongovernmental co-chairs who are not permitted to hold leadership positions in the NCTN groups, although they can be group members. The remainder of the committee membership consists of NCTN group members selected by each group, other disease experts not involved in leadership positions in the groups, representatives of NCI-funded SPORE and consortia, biostatisticians, patient advocates, and NCI disease experts.

NCTN groups are able to reduce the costs of conducting trials by sharing resources. This collaborative approach allows members of one NCTN group to support trials led by other groups and affords NCTN members the ability to conduct a full portfolio of trials in the most common cancers.

Because the NCTN has only four U.S. adult groups, with fewer Operations and Statistical Centers that require financial support, there has been a net cost savings, according to NCI. All of the groups use a common data management system (Medidata Rave) and an integrated IT system for the tissue banks, which translates into cost savings.

Claire Dietz contributed to this story.