Vinay Prasad, a cyber-iconoclast for all things cancer, appears to have closed the Twitter account that made him a brand in oncology.

At first glance, Prasad appears to have erased his personal presence on Twitter—his 30,000 tweets are gone, along with all recognizable traces of his account, which had about 21,300 followers as of late June.

A hematologist-oncologist at Oregon Health and Science University, Prasad, 35, built a reputation as a skeptic about many new directions in oncology. In 2018, he was invited to debate proponents of precision oncology at the annual meetings of both the American Association for Cancer Research and the American Society of Clinical Oncology.

Prasad has regularly criticized FDA’s regulation of cancer drugs and, when encountering opposing viewpoints on Twitter, he has blocked people who challenged him. Embracing the lexicon of social media, on occasion he has used the juicy acronym STFU (The Cancer Letter, June 22).

Prasad seems to have moved to another Twitter account, “Plenary Session Show,” which publishes podcasts on “medicine, oncology, and health policy”—including his old “Tweetorials”. That account, @PlenarySessShow has over 32,000 tweets and 25,000 followers. 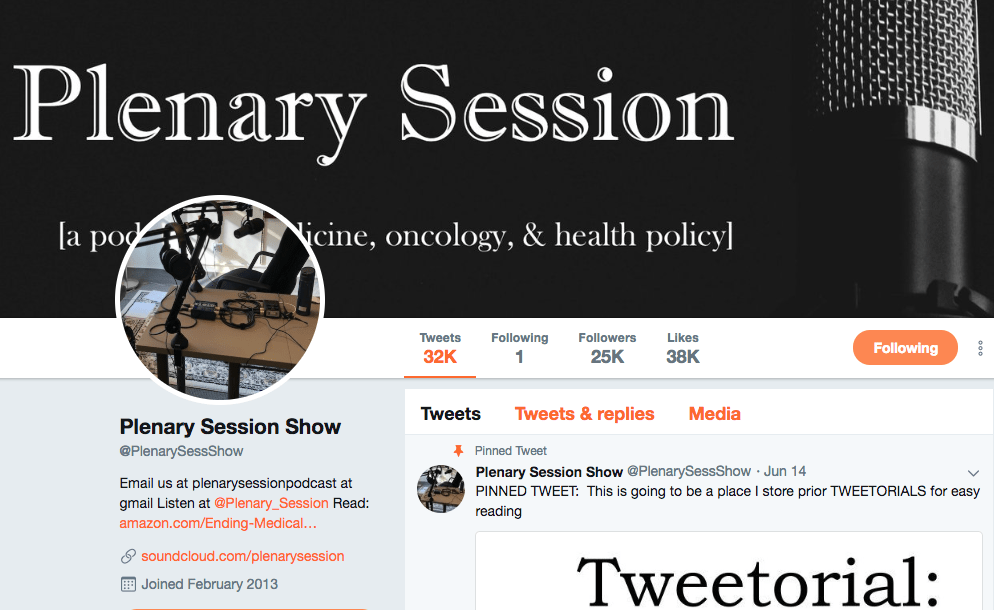 @PlenarySessShow is linked to Prasad’s personal website, but his connection to the tweets isn’t immediately apparent. There are tweets—many of them—but the reader doesn’t necessarily know whether Prasad is at the keyboard.

As of Sept. 6, @PlenarySessShow only follows one account, @Plenary_Session, which has the following description: “A podcast on medicine, oncology, & health policy. Host: Vinay Prasad, MD MPH (vinayakkprasad.com). Listen on iTunes!” 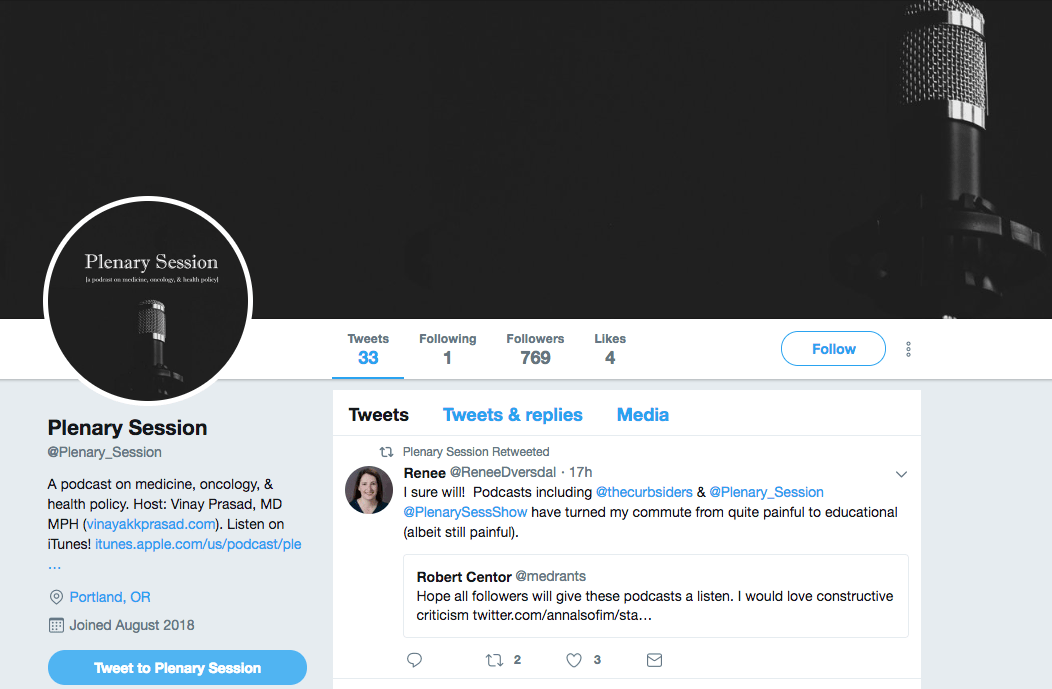 @Plenary_Session has over 700 followers and, in a circular motion, also follows only one account, @PlenarySessShow.

If a strategy is at play, it’s not as simple as Vinay Prasad being the voice of @VinayPrasadMD. There, you knew immediately who was talking.

So why has he pulled up stakes on @VinayPrasadMD?

“Thanks for the note. I will decline to answer your questions,” Prasad said in response to an email from The Cancer Letter.

After The Cancer Letter found Prasad’s new @PlenarySessShow handle Sept. 6, we followed him. At that point, Prasad changed his Twitter handle again, renaming it @VPplenarysesh—VP @ Plenary Session—and updated his profile picture, featuring himself. 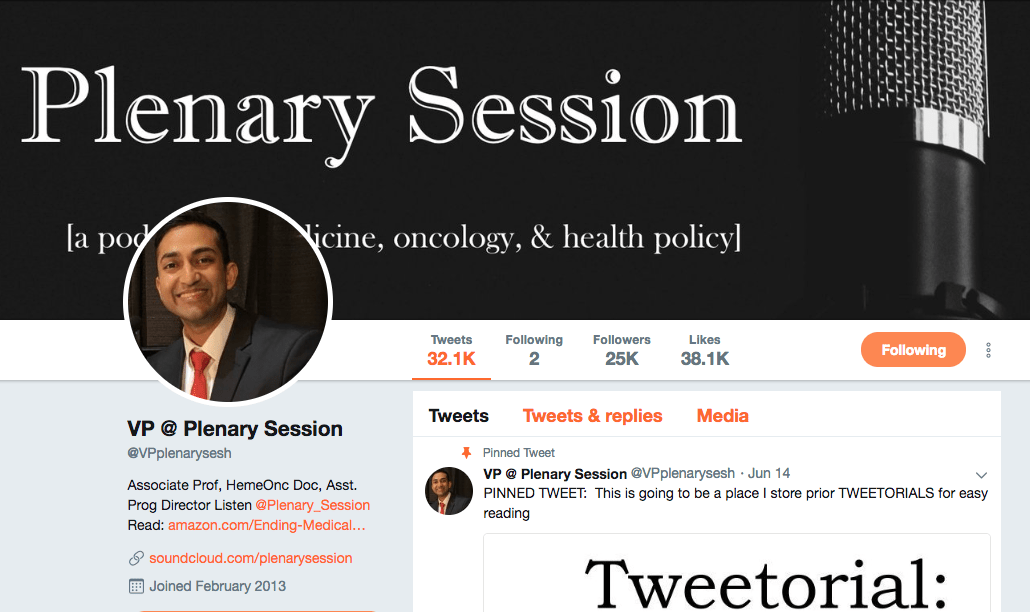 It is now apparent to all his followers that @VPplenarysesh is Prasad’s new personal social media platform—at least for the time being.

In a recent conversation with The Cancer Letter, Prasad had this to say about his relationship with Twitter:

At present, @VinayPrasadMD is linked to an account that bears no resemblance to Prasad’s vociferous brand. Instead of “Vinay Prasad” of Portland, OR, the page now belongs to “Vidwan” from “New York, USA.” 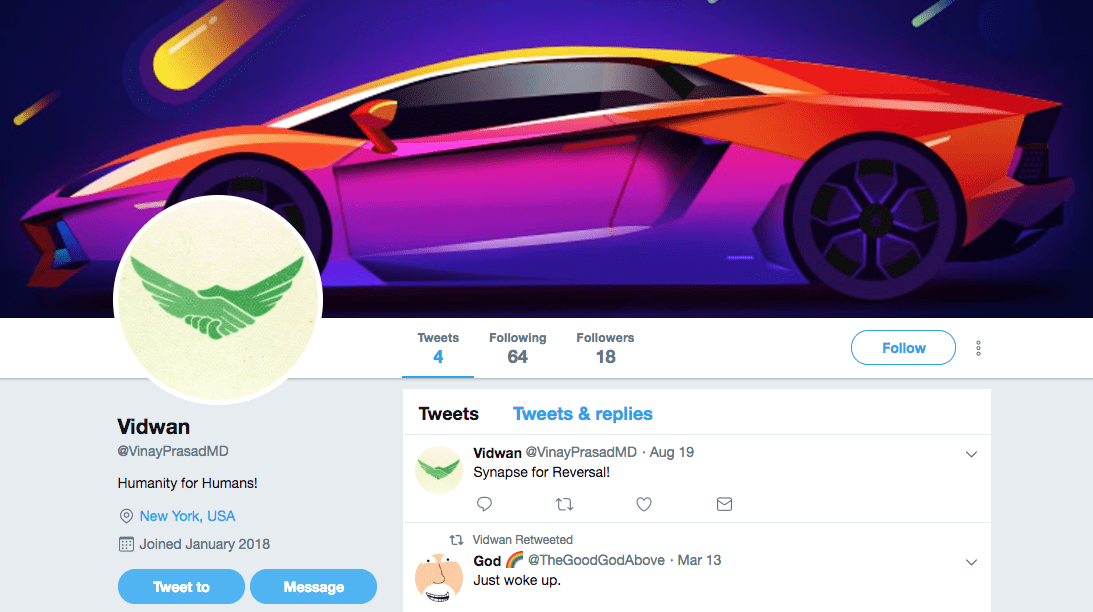 Where @VinayPrasadMD’s bio once stated, “MD/MPH, Assc. Prof, Heme-Onc doc, EBM & Policy; Author of: amazon.com/Ending-Medical… Funded by @LJ_Foundation Sorry, cannot respond to all messages,” it now reads, “Humanity for Humans!” beneath a profile image of two green, winged arms in a handshake and a cover picture of a muscle sports car in shades of electric neon.

It remains to be seen whether Prasad will retain his online gadfly persona @VPplenarysesh, but for now, @VinayPrasadMD hasn’t tweeted about cancer or drug development.