A Cancer Patient’s War on Cancer

Imagine a hospital ward 100 years from now. Will multi-drug resistant infections be as prominent as they are today? I suspect so, because as antibiotics evolve, so will the infectious diseases they target. It’s an arms race in which both sides have a capacity to learn and adapt. Not so cancer. Cancers can’t learn from each other. But cancer patients can. This profound imbalance in the capacity for learning is an advantage that all cancer patients share. It is our super power. And we barely use it.

I am a hematologist, professor, scientist, and blood cancer patient. In April 2015 an X-ray uncovered a large hole in my left iliac crest. This turned out to be caused by a large plasmacytoma, leading to a diagnosis of myeloma. Like every other cancer patient I embarked on my own unique path of choices and consequences. Figure 1 shows my cancer decision tree.

My decisions have been best judgments based on information available at the time. Despite access to the very best resources that medicine can provide, a wife who is an oncologist, and a brilliant hematologist/colleague/friend as my physician, I am essentially flying by the seat of my pants. A common thread connecting all of my decisions is the premise that my fight against cancer is a fight against evolution. A few highlights… 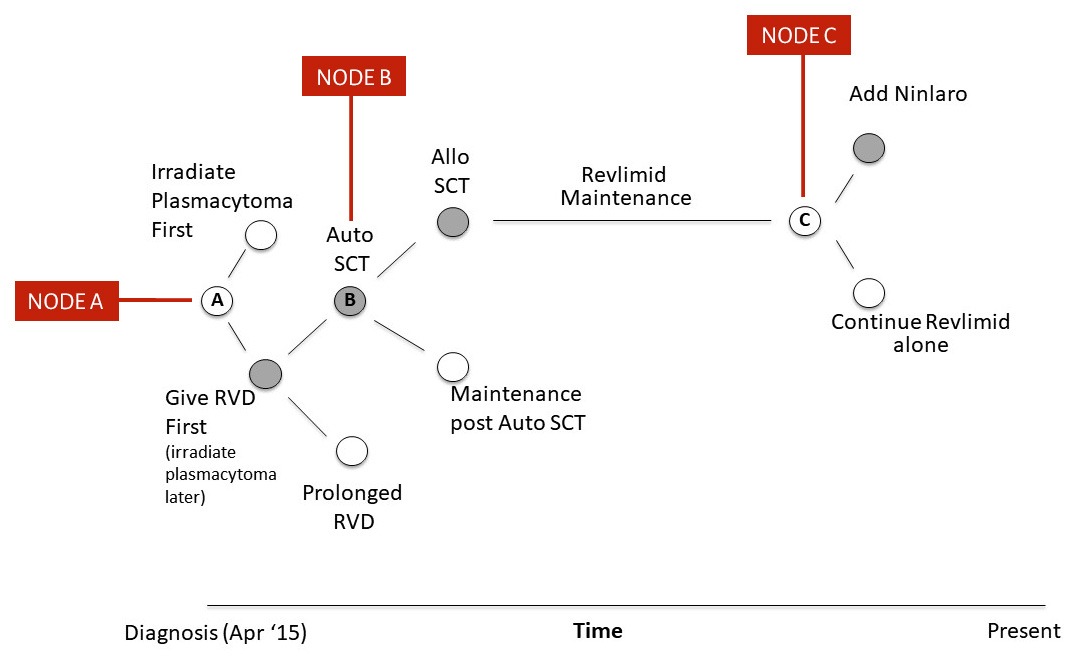 Node A: My first therapeutic decision pertained to whether to start radiation to the plasmacytoma first or start systemic therapy first. I chose systemic therapy (with revlimid – velcade – decadron – RVD), followed by radiation to the shrunken residual mass some months later. This decision was based on a desire to attack all myeloma cells at the outset, rather than a subpopulation.

Node B: Early on I learned that one of my two brothers was an HLA match, but absent high risk cytogenetics most experts recommended against an allogeneic stem cell transplant. I decided to go forward with an allo transplant only after residual myeloma cells were detected following my autologous stem cell transplant (0.003% of marrow cells by flow cytometry). A back-of-the envelop calculation suggested that this likely represented 10 million or more total myeloma cells, and a hoped for graft-versus-myeloma effect seemed my best option for achieving a multi-log reduction in tumor cells.

Node C: Shows a recent decision. Following my allogeneic stem cell transplant I started revlimid as maintenance therapy and continued for the next 18 months. Although myeloma cells are no longer evident, millions may still lurk undetected. I reasoned that any remaining myeloma cells will have adapted to treatment with revlimid alone, and I therefore decided to add ninlaro.

Having no way of knowing whether my choices were right or wrong, I’m left with meager aphorisms like “so far so good” and “time will tell”. How useful it would have been for me to have had access to the detailed histories of hundreds of other patients facing similar decisions and visibility into the consequences of their choices. While I am not the first to face these decisions, there is no visible trail of the choices and outcomes of those who have gone before me.

To capture this lost knowledge I founded All4Cure, a for-profit company that has built a knowledge-sharing platform for patients, clinicians and researchers. Our initial focus is in myeloma. Individuals register for free by visiting All4Cure.com, providing their names and email addresses, and accepting our terms of service and privacy policy. As of January 18, 2018 more than 260 participants have registered, including >160 myeloma patients, 32 clinicians and 21 researchers.

Patients provide access to their medical records and waive HIPAA protections to enable All4Cure to post their de-identified information on its Knowledge Sharing Platform. From each patient’s medical record we extract information to create their own de-identified, personalized dashboard, featuring a graph that captures the entire trajectory of their disease, including all treatments and responses, from diagnosis to present. Inconsistencies across medical records are resolved by contacting patients directly.

By capturing all medical records from all institutions where our patients have been seen, All4Cure’s database provides the most complete, granular and accurate depiction of a patient’s experience with cancer that is possible to assemble. Each patient’s dashboard also contains a discussion panel that allows his or her specific situation to be commented on by all other participating patients, clinicians and researchers. Our Terms of Service stipulate that All4Cure and its participants do not provide medical advice.

Figure 2 shows the graph that appears on my All4Cure dashboard. Each treatment (top) and lab (bottom) is assigned a distinct line and color, and tabs below the graph allow users to track specific labs of interest. Hovering over each data point reveals details about the treatment or lab and the corresponding date. You can access my graph on an interactive web interface by visiting the All4Cure website and clicking on the tab labeled “Dashboard” (no registration required). To date >160 myeloma patients, >30 clinicians, and >30 researchers have registered on All4Cure’s Knowledge Sharing Platform. Dashboards for 90 patients are currently available for viewing and that number grows weekly. 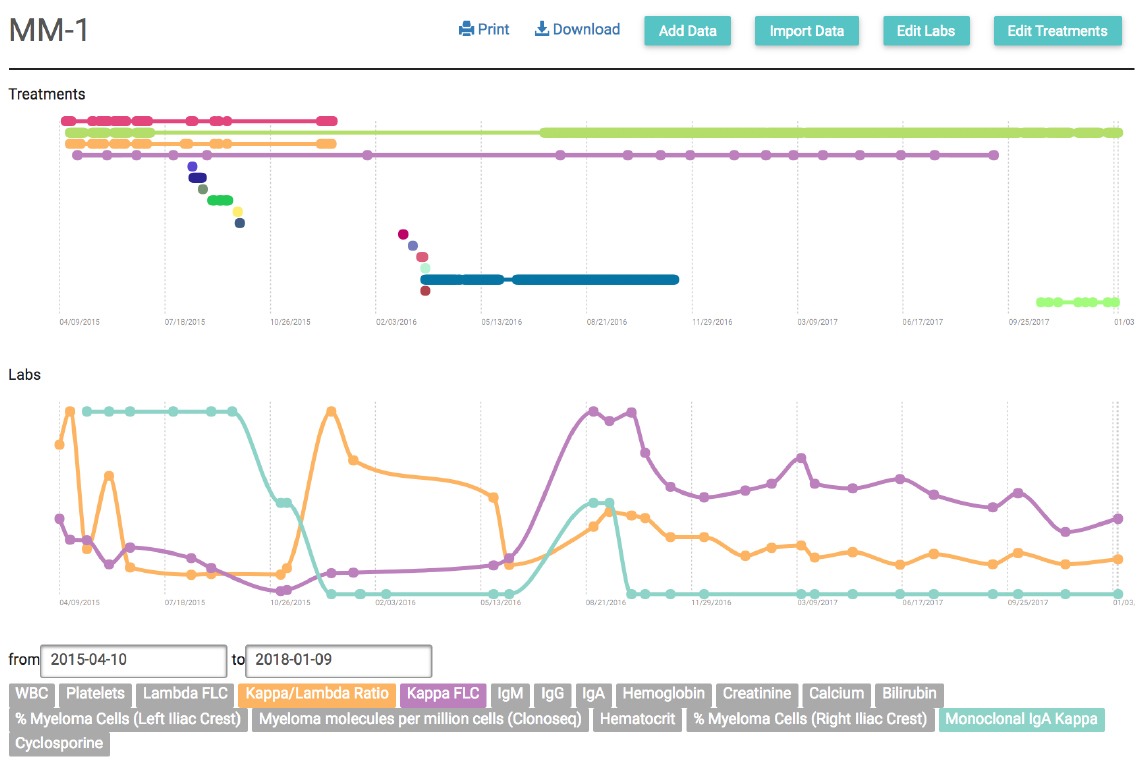 Figure 2. Graph appearing on my All4Cure dashboard, depicting all of my treatments and responses, from diagnosis to the present. Each treatment (top) and lab (bottom) is assigned a distinct line and color, and tabs below the graph allow users to switch between labs of interest. Hovering over each data point reveals details about the treatment or lab and the corresponding date. All4Cure’s website is interactive, so that hovering over each data point uncovers details about treatments and lab values and the corresponding dates.

We have completed dashboards for 90 myeloma patients that include more than 100,000 data elements. Our database contains information gathered from the medical records of between 1 and 5 (mean 1.6 +/- 0.8) institutions per patient. Each patient dashboard also contains a discussion panel that allows his or her specific situation to be commented on by all other participating patients, clinicians and researchers. To date a total of 30 unique participants have posted comments on All4Cure patient dashboards, including Drs. Ken Anderson (Dana Farber), Shaji Kumar (Mayo Clinic), Bill Bensinger (Swedish Medical Center, Seattle), Edward Libby (Seattle Cancer Care Alliance), David Coffey (Fred Hutchinson Cancer Research Center), and Nick Burwick (Puget Sound VA Medical Center). Among many examples in which All4Cure has been helpful to patients, two are described here.

Example 1. Bringing a Distributed Network of Expert Opinions to Bear on the Problems of One Patient

Patient MM-80 is a 61 year-old retired flight attendant who was diagnosed with myeloma (IgG Kappa, high risk cytogenetic features) in August 2016 and enrolled in All4Cure on May 26, 2017 (Figure 3). She responded well to initial treatment with Kyprolis, Revlimid and Decadron and was referred to the Seattle Cancer Care Alliance (SCCA) for an autologous stem cell transplant followed by an allogeneic stem cell transplant from her HLA matched brother. However, following stem cell collection she developed extensive disease relapse accompanied by the infiltration of myeloma cells into her cerebrospinal fluid (CSF). Despite extensive systemic and intrathecal treatment, the persistence of myeloma cells in the CSF precluded her from proceeding to an autologous stem cell transplant and she was returned to the care of her primary oncologist. 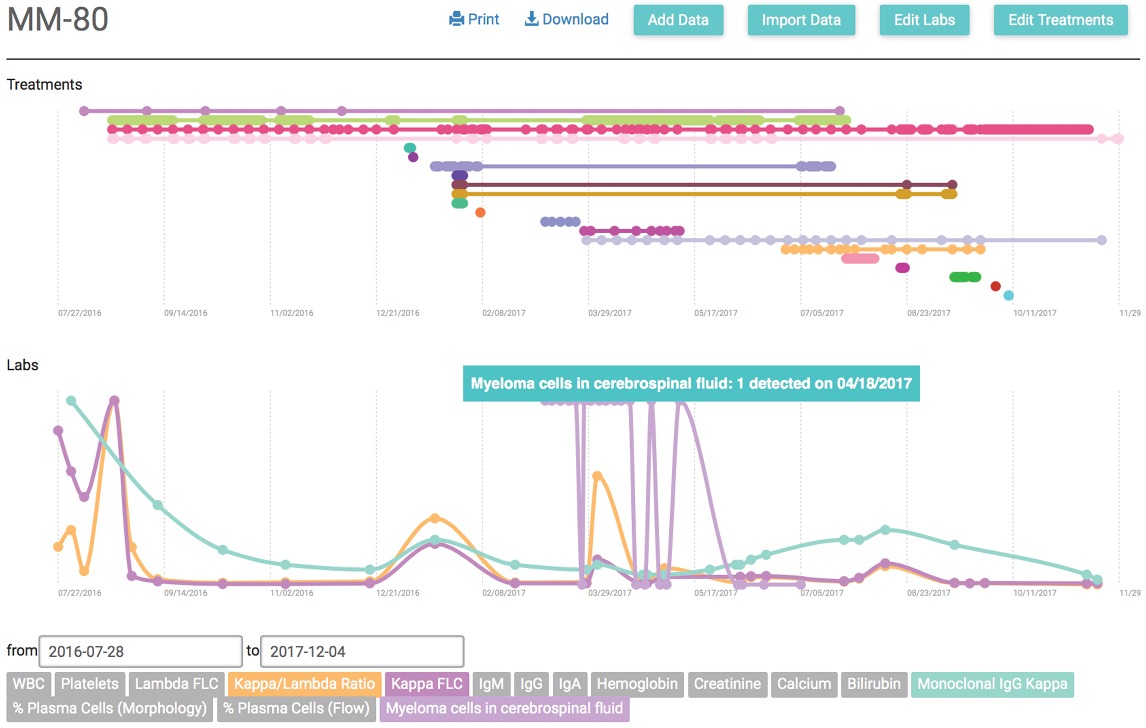 All4Cure sought the input of experts in search of therapeutic options, and two experts commented on the patient’s All4Cure dashboard. Dr. Bill Bensinger (Swedish Medical Center, Seattle) suggested consideration of a combination chemotherapy regimen that the patient had not yet received.

Although we weren’t able to access Marizomib, the treatment suggested by Dr. Bensinger (high dose Methotrexate plus AraC) allowed her to proceed to an autologous stem cell transplant followed by an allogeneic stem cell transplant that was performed on December 27, 2017. This experience highlights how All4Cure enables global expertise to be applied to the problems of one patient, and how information gathered about one patient can be shared for the benefit of other patients facing a similar situation.

All4Cure allows patients to compare their treatments with those of other patients. Patient MM-105 exemplifies this concept. Her myeloma history is depicted on her All4Cure Graph as shown in Figure 4. She developed myeloma in the summer of 2015 and was treated with Velcade and Decadron. Her M-protein fell from 4 g/dl at diagnosis to a nadir of 0.4 g/dl and she elected to defer an autologous stem cell transplant. She remained on Velcade and Decadron for the next two years.

After joining All4Cure the patient discovered that the large majority of myeloma patients enrolled in All4Cure were treated with 3 drugs – revlimid, velcade, and decadron (RVD) rather than the 2-drug regimen that she had been receiving. She decided to change oncologists and asked for our suggestions regarding other oncologists in her area. All4Cure experts recommended 2 oncologists in her area; she visited both and chose one to continue her care, and switched treatment to a 3-drug regimen consisting of revlimid, empliciti and decadron. This example demonstrates how MM-105’s ability to compare of her own treatments with those of other patients allowed her to exert a greater level of control in her own care.

There were two responses, one from me, and the second from Dr. David Coffey, Assistant Professor at the Fred Hutchinson Cancer Research Center (not shown due to length). Although the process of generating these posts was time consuming, All4Cure is building a structured knowledge base so that information generated about past patients can be rapidly adapted an applied to future patients.

There is a growing emphasis on capturing patient reported outcomes, and patient MM-105 again exemplifies how All4Cure is ideally positioned for this purpose. After switching to empliciti, revlimid and decadron, the patient posted the following on her dashboard.

Following a brief hospitalization the patient did well and has tolerated further treatments with the same regimen uneventfully. 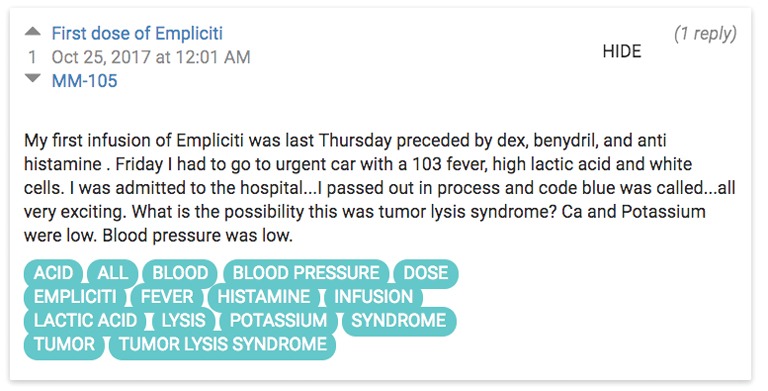 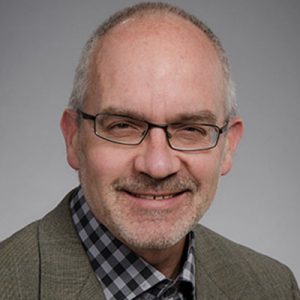 The University of Virginia has taken a long, circuitous path to NCI comprehensive cancer center designation, but it got there.
By Paul Goldberg

With growing evidence that molecular characterization of a tumor helps predict a patient’s prognosis and response to specific treatments, biomarker testing has been required or recommended for more than half of the 62 oncology drugs introduced over the past five years. However, health insurance policies don’t always cover tests, thus denying their clients access to precision medicine.
By Alice Tracey

The National Coalition for Cancer Survivorship began in 1986 with 23 people at a hotel in Albuquerque and a $100 contribution from Patricia A. Ganz, who recalls thinking: “I don’t think I’ve ever invested in anything that was so good.”
By Alexandria Carolan