This story is part of The Cancer Letter’s ongoing coverage of COVID-19’s impact on oncology. A full list of our coverage, as well as the latest meeting cancellations, is available here.

The American Cancer Society has raised $160 million so far this year, an astonishingly low number for an organization that historically has booked about half of its funds from walks, runs, and relays that take place in the spring and early summer.

These walks, runs, and relays, have, alas, been cancelled amid the COVID-19 pandemic.

According to information widely shared with the staff, ACS, the largest nonprofit focused on all cancers, is hoping to raise $512 million this year. This target represents the best-case scenario for the charity, which is believed to have raised around $700 million last year. The 2019 numbers have not been reported.

Responding to questions from The Cancer Letter, ACS said its overall goal for the year is realistic. “Our fundraising goal for the year is $512 million, and while the economic climate continues to be very volatile, we believe we will meet that goal, based on our revenue projection,” the society said in a statement.

“COVID-19 upended many of ACS’ key fundraising events, including Relay for Life, and we, like many others, were forced to quickly find digital and virtual ways this year to continue,” ACS said. “We had virtual events throughout the spring, and will continue with those through the summer and fall. We’ll reach [the fundraising goal] the way ACS has always raised money: we’ll engage volunteers and partners, both online and offline, to share the urgency of continuing our lifesaving work.”

The $512 million target represents an eerie landmark for the charity—nearly a 50% drop from the $1.039 billion in total public support it reported in 2007, its best year ever. The society’s financial performance has been eroding since then, amid attempts at fundamental reorganizations, experiments with fundraising strategies, and struggles to tame discord among top leaders.

While gross receipts have been eroding steadily, the latest downturn is much steeper than anything seen since the bad stretch set in.

ACS is acknowledging the possibility that for the first time in its history it may not be able to fully fund approved grants this fall. Altogether, ACS has given out $4.9 billion in research funding since 1946.

The society has said publicly that in 2018 it spent $147 million on funding cancer research. Research funding remained at the same level in 2019, sources say. That year, about $98 million was paid out in grants, an estimated $12 million was spent on grants administration, and the remainder—about $37 million—funded ACS intramural research.

So far in 2020, ACS has awarded an estimated $36.165 million in 79 extramural research and training grants during the spring round of funding. The grant starting date was moved from July 1 to Sept. 1, to accommodate institutions that are partially shut down because of COVID-19.

The ACS Council for Extramural Research also approved 73 grant applications for funding, totaling $38,988,850 that could not be funded due to budgetary constraints.

If the fall round of grants, which usually occurs in September, is skipped, this would mean that researchers would not get roughly $60 million in grants, compared to last year.

“If current revenue trends continue, we could be forced to cut new research funding this year by 50%,” ACS said in a statement. “We continue to meet the commitments made for multi-year grants, sending millions of dollars every month to institutions across the country.

“At this point, we are exploring options around new allocations, but we will not make final decisions until we have a clearer fiscal picture. As the largest private, not-for-profit funder of cancer research in the United States, reducing our research spend by any amount is an action we want to avoid.

“Researchers across the country need us, and importantly, cancer patients depend on the discoveries our research yields. In addition, we are doing everything possible to protect funding for other mission priorities, including prevention and early detection (lung, HPV, colorectal, breast, tobacco), health equity, patient care and services, clinical partnerships, and survivorship and palliative care.”

Sources said that the ACS grant review team was drastically reduced in the most recent round of staff cuts.

It’s not publicly known how other cancer charities have been affected by the COVID-19 pandemic.

While publicly traded companies have to release quarterly reports and announce developments that affect their financial performance, non-profits have no such obligations. Even their annual tax filings become publicly available about a year after the year’s end.

Thus, in 2018, the most recent year for which tax filings are available, ACS reported having the net assets of $1.092 billion. It’s not publicly known how much of that amount was available and whether any of it has been drawn down in 2019.

Last week, the society said it has eliminated 1,000 positions across the U.S., as part of an effort to reduce its overall budget by approximately 30%. The staff cuts mean that the society would now have a workforce of about 3,000.

“Our $500 million operating budget was done carefully, based on forecasting that takes the country’s current climate and giving trends into account. Layoffs are our last resort, and we believe that the painful staff downsizing done this spring is in line with our projections and will be sufficient. We will continue to monitor the external environment closely and look for additional opportunities to streamline our operations so that we are able to best respond and continue advancing our mission.”

The society’s long decline cannot be blamed on the financial crisis on 2007. Indeed, while its fundraising sputtered, ACS was surpassed by St. Jude Children’s Research Hospital and the American Lebanese Syrian Associated Charities Inc., a group that raises money for the Memphis-based pediatric hospital. According to their tax filings for 2017, St. Jude raised $981 million in 2017 and ASLAC raised $1.65 billion that year. On top of that, the two organizations have billions in assets.

As it happened, ACS top leadership was in transition when COVID struck (The Cancer Letter, Feb. 7, 2020).

In February, after months of turmoil among top-tier warlords, CEO Gary Reedy stepped away from the society’s day-to-day operations, and Kris Kim, executive vice president for the Northeast Region, stepped in as an acting COO.

“I recognize the need for me to focus my efforts externally, which requires different leadership to oversee day-to-day operations,” Reedy said in an email dated Feb. 5 and addressed to the ACS staff. At the time, Reedy wrote that the “changes to the senior staff… will better position the American Cancer Society to deliver on the three-year enterprise strategic plan so that we may meet the challenge goal to reduce cancer mortality by 40 percent by 2035.”

Knowledgeable sources at the time said that conflicts among members of the society’s “senior leadership team” have on several occasions reached the board level. At least two SLT members have been known to take their grievances directly to the board, sources said.

In an emailed response to questions from this reporter in February, Reedy wrote that the society’s “financial profile has stabilized, and we are on solid ground. In fact, the financial stability that we’ve worked so hard to achieve over the past few years is in large part what now positions us to undertake our Strategic Plan, with this new leadership structure to support it.”

Over the past year, ACS has gone through three CFOs: Catherine E. Mickle was replaced by Robert M. King, who lasted roughly six months and resigned to go to become CFO of Goodwill of North Georgia, after which Mickle returned to the old job, which is now relinquishing for Kael Reicin, a CFO at Geller & Co., a firm that provides custom strategic financial advice and wealth management for businesses, individuals, families and not-for-profit organizations.

“Over the past few years, the American Cancer Society has undertaken the challenging process of replacing very old back office systems that were creating inefficiencies and operational risk,” Reedy said in response to questions from The Cancer Letter at the time. “It has been a complex process, and hiccups were expected. Our transition to Salesforce is now complete, and while we certainly expect to tweak the systems as we go, we are now positioned to leverage technology for greater efficiency and impact.”


When he spoke with this reporter in 2018, Reedy, formerly a Johnson & Johnson executive, said his initial employment contract was signed in April 2015 was renewed for another three years in 2018, giving him through April 2021 (The Cancer Letter, Jan 26, 2018).

To control costs, Reedy presided over three earlier reductions in staff between 2015 and 2018. Insiders say the savings are making ACS more self-sufficient in the long term. Reedy also said that at the time of his arrival, the society’s No. 1 fundraising event, the Relay for Life, wasn’t producing money.

“Part of the strategic plan, Paul, was looking at everything we’re doing across the board, and looking at it from efficiency and an effectiveness standpoint, and where it’s having impact in the communities, where people are engaged, then we are continuing to do that and will continue to, and will also continue to make it more customized,” he said.

“But in areas where we were doing Relay events or whatever, there was very little engagement and we were putting a lot of time and resources into it, and from a revenue standpoint, we’re actually losing revenue. We cut those out. We knew going into ’17 that our revenue more than likely was going to be a little bit less than 2016, and it is, but for 2018 going forward, I’m expecting to have revenue increases every year from here on out.”

Some of the society’s efforts to get sponsorships led to entanglements that appear to be inconsistent with the society’s public health mission. To wit, The New York Times reported the society’s campaign that amounted to sanctioning Long John Silver’s marketing of deep-fried Twinkies. Also, ACS has allowed its iconic shield to be displayed by a sports bar chain called Tilted Kilt as well as the dietary supplements marketer Herbalife (The Cancer Letter, Nov. 9, 2018).

The campaigns also reportedly led to departure of Otis Brawley, the society’s chief medical officer, who is now the Bloomberg Distinguished Professor of Oncology and Epidemiology at the Johns Hopkins University (The Cancer Letter, Nov. 9, 2018). 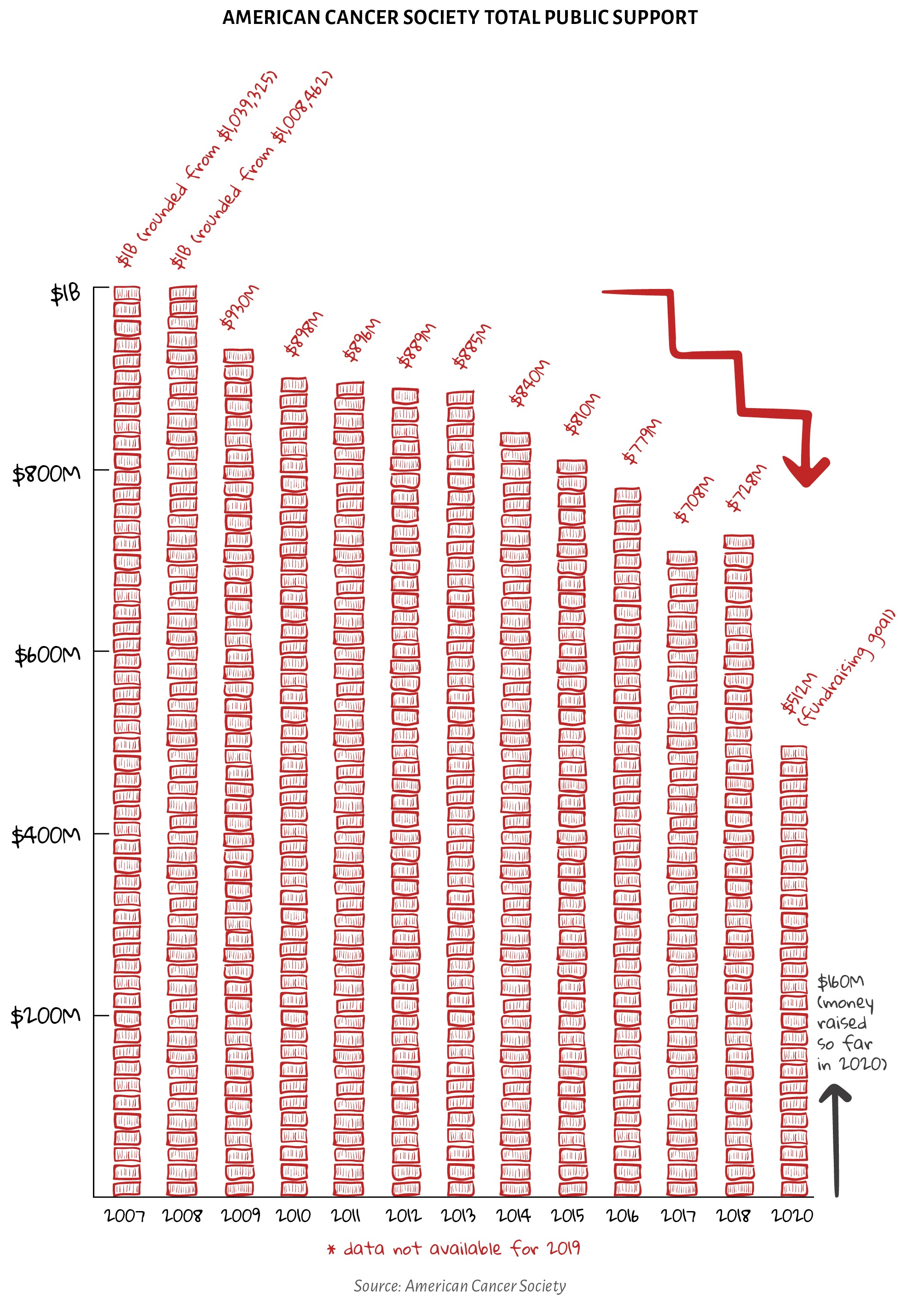