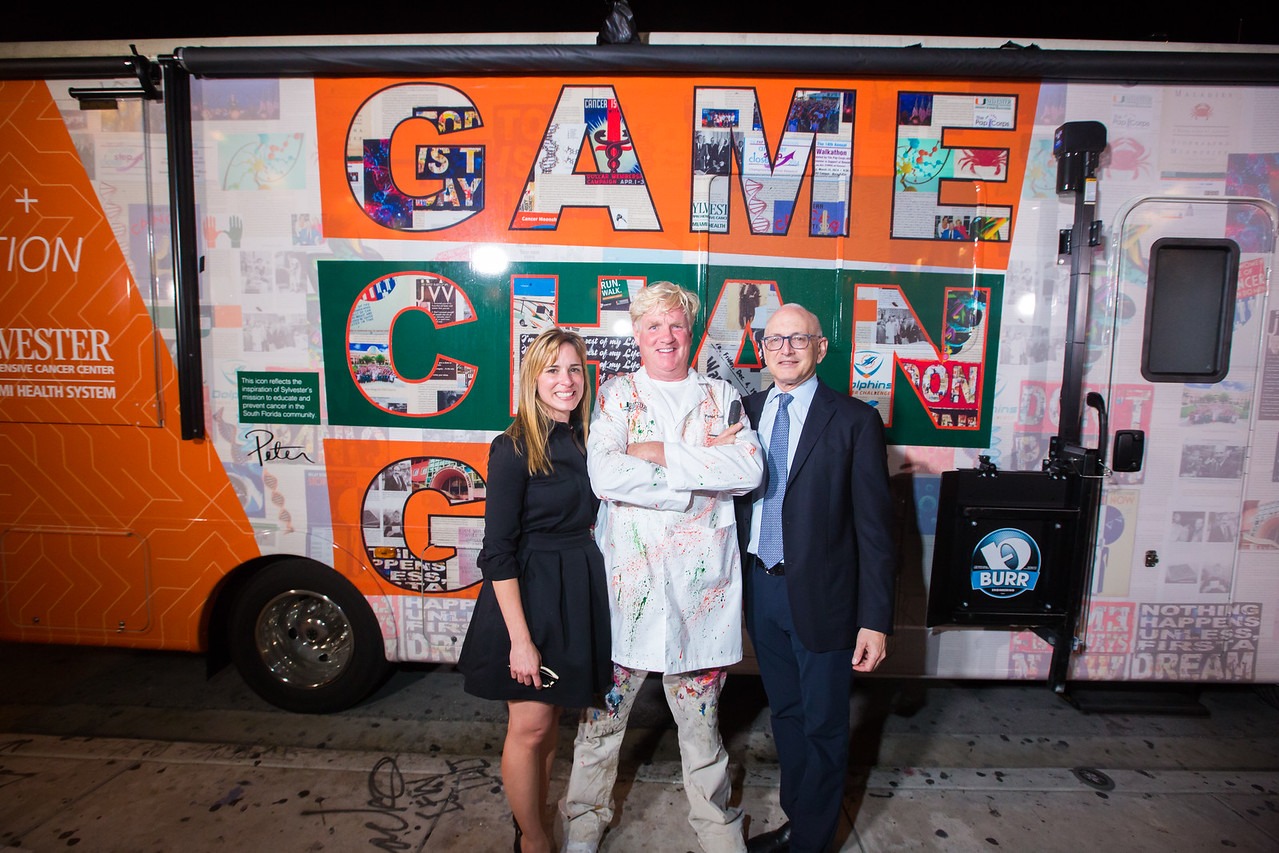 In Miami, Tunney and business partner Jessica Goldman recently helped transform the gray cement of the Miami Dolphins Hard Rock Stadium into one of the largest street art museums in the world.

Tunney runs two galleries in Wynwood Walls, an urban park devoted to street art, where he and Goldman run two galleries. In one of these galleries, visitors can touch the purportedly $1 million chandelier Tunney had salvaged from Donald Trump’s famously defunct Taj Mahal casino in Atlantic City, NJ.

Brought down to eye level, the thing conjures images of a fallen empire, providing the backdrop for Tunney’s collages of playing cards smoothed into an American flag and architects’ blueprints peeking out of a comfortingly determinist message: “THE TRUTH ALWAYS HAPPENS.”

One day in late February, an RV-sized van wrapped in a painting Tunney created for the University of Miami Sylvester Comprehensive Cancer Center pulled up in front of his gallery in Wynwood Walls, a worldwide destination for admirers of murals and the genre some still call graffiti.

The words “GAME CHANGER” were painted on the RV’s side, and if you looked closer, you saw the layering of iconic imagery of all things cancer. The van was a piece of moving art, a gigantic puppet, one artist’s contribution to the quest for social justice.

The RV is a part of an experiment conducted by Sylvester. Since human subjects are involved, a green light from the IRB is required, but once that’s done, the behemoth will set out on its appointed rounds, providing information on cancer as well as evidence-based interventions in Liberty City, Little Haiti, Little Havana, and LGBTQ neighborhoods.

If all goes well, Sylvester will be adding vans—bringing the total to as many as four, one per county in the center’s catchment area. Tunney says he will be happy to provide the artwork and, if invited, join the RV’s crew.

“I think the game is the accepted-by-default status quo,” Tunney said. “Changing the game is literally waking up to a little bit of perspective. The real game changer is when we open our minds, when we can have an open mind to look at things differently.”

A conversation with Tunney appears here.

Cancer centers engaged in clinical research and care that are vying to obtain—or retain—the coveted NCI designation have to fulfill the requirement called COE—short for Community Outreach and Engagement. Basic science centers are exempt from having to meet these requirements.

COE became a part of NCI’s requirements for designation in December 2017, and now insiders at multiple cancer centers say they are approaching it as one of the most important components of the application, second only to Director’s Overview.

“Since the establishment of the NCI Centers Program in the National Cancer Act of 1971, NCI-designated cancer centers have been expected to undertake special efforts to reduce the burden of cancer in the communities in which they are located,” said Henry Ciolino, director of the NCI Office of Cancer Centers. “To better reflect and further emphasize these efforts, a new component of the Cancer Center Support Grant called ‘Community Outreach and Engagement’ has been adopted.

“In this, cancer centers describe—and peer-reviewers stringently evaluate—their research on cancers of particular importance to their populations. These include cancers of high incidence, those that result from health disparities in racial and ethnic minorities, rural residents, women, children, the elderly, and those that result from local environmental exposures, behavioral factors, and other issues,” Ciolino said to The Cancer Letter. “In order to prevent and treat cancer in the communities they serve, cancer centers form and maintain strong linkages to community partners, including members of underserved and minority populations, which help centers disseminate their knowledge of how to prevent and treat cancer. This is a critical part of the NCI’s national mission.”

Here is what all cancer centers are expected to show:

“Community engagement is an essential part of advancing cancer research. We must maintain focus on ensuring underrepresented groups are included in research studies,” Robert Croyle, director of the NCI Division of Cancer Control and Population Sciences, said to The Cancer Letter. “In addition, implementation of evidence-based programs depends heavily on the quality of partnerships with community organizations in both the clinical and public health sectors. So, it’s encouraging to see efforts at cancer centers that emphasize this important area of cancer research and care delivery. NCI will continue to collaborate with cancer centers to help raise the bar—improving engagement and the impact of cancer centers in their communities.”

It’s unlikely that anyone has approached the COE requirement more artfully than Sylvester. The Miami-based cancer center is scheduled to file an application for the P-30 grant with NCI on Sept. 25.

It’s not clear who came up with the name for Sylvester’s flotilla. Erin Kobetz, associate director for population science and cancer disparity at Sylvester, says the words popped up in a brainstorming session and had something to do with the cancer center’s relationship with the Miami Dolphins football team.

It being South Florida, someone came up with the idea to translate “game changer” into a bunch of languages; not a simple task since idioms are involved. The translations will be posted inside the van.

The next step was obvious—Kobetz wanted to ask Tunney to make the art.

Tunney was a logical choice because of his appreciation for both art and science and his dual role as an artist and an art entrepreneur, Kobetz said. In a previous career, he worked on Wall Street, investing in biotechnology. In 2010, he became the first and only tenant in Wynwood Walls, opening galleries in an area that was being transformed from a shooting alley to one of the world’s premier hipster destinations.

“Peter’s art speaks to our common humanity,” Kobetz said. “Many of his pieces have a very explicit bent toward the possibility of social action.”

When she went to see Tunney, Kobetz was prepared to deliver a pitch, focusing on the role art can play in overcoming health disparities.

“About a half a sentence into it, I said, ‘Erin, I’m going to save you the whole spiel. I’m in. What do you want me to do? I’ll do it.’” Tunney recalled recently.

South Florida may be one of the world’s capitals of health disparities. Among the African American population, you get reverberations from the Tuskegee experiment, where black men with syphilis were left untreated in an observational study even after effective treatments for the disease became available.

The Henrietta Lacks story, too, is still real, a relic of the time when researchers could take your cancer cells and commercialize them without consent.

To a public health advocate, an ethical abomination from the past is a barrier. To an artist, it’s just more material—and that’s the game changer.

South Florida presents challenges you find in few other places.

Among Haitian women, there is reticence to get pelvic exams. The answer: Sylvester dispatches Creole-speaking health workers to convince Haitian women to self-sample. Working with the biochemistry department, Kobetz developed an equivalent of an over-the-counter pregnancy test that detects the DNA of HPV.

Among Afro-Caribbean women, you get a BRCA-1 mutation that confers a high risk of breast or ovarian cancer, but since prevalence of this mutation is unknown, women don’t know they are at risk. Sophia George, a Sylvester researcher, recently received a Department of Defense grant to study the ovarian cancer risk in that population.

“First, we need to better understand what these women know about their risk for cancer. How is a family history of breast or ovarian cancer communicated throughout an extended family?” said Stephen Nimer, director of Sylvester Comprehensive Cancer Center. “Also, we can’t assume that every woman from the Bahamas or Jamaica knows that if they have a positive family history, they need to get a mammogram starting earlier, or that they may need to undergo a pelvic exam, to reduce their chance of dying from breast or ovarian cancer.”

“Monroe County, that includes the Keys, has not recovered, so we want to be out there and to help them with reestablishing the system and making it better,” Nimer said to The Cancer Letter. “And we want to have a mammography van to reach that area.”

Sylvester’s outreach program is also working with the Florida Department of Health to distribute PrEP, pre-exposure prophylaxis, pills that reduce the risk of HIV infection.

Sylvester was one of the first-generation NCI-designated cancer centers in the 1970s, and while the cancer center lost the designation in the mid-1990s, the word “comprehensive” remained as part of its name.

The institution applied to reinstate the designation in 2007, but was unsuccessful.

“We have been improving our research and educational infrastructure, recruiting dozens of cancer physicians and researchers, and building research programs and multidisciplinary clinical programs, so we can have the greatest impact on our community,” Nimer said.

“Through the van, and the efforts of so many, like Peter Tunney, we are bringing clinical cancer care, education and research to communities that have never embraced these missions before,” Nimer said.

“Given the diversity of the region that we live and work in, we are thrilled to help change the game.” 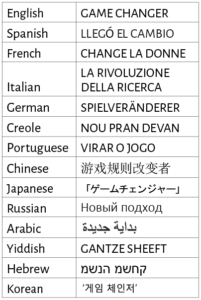