A general in BATTLE, Waun Ki Hong was a pioneer of precision medicine

I was heartbroken to learn of the passing of my mentor, colleague, and friend, Waun Ki Hong. Dr. Hong was the quintessential physician scientist who specialized in all aspects of medicine, but most notably patient care, research, and education. This is a devastating loss for the entire oncology community, and especially for all of the patients he cared for and helped. 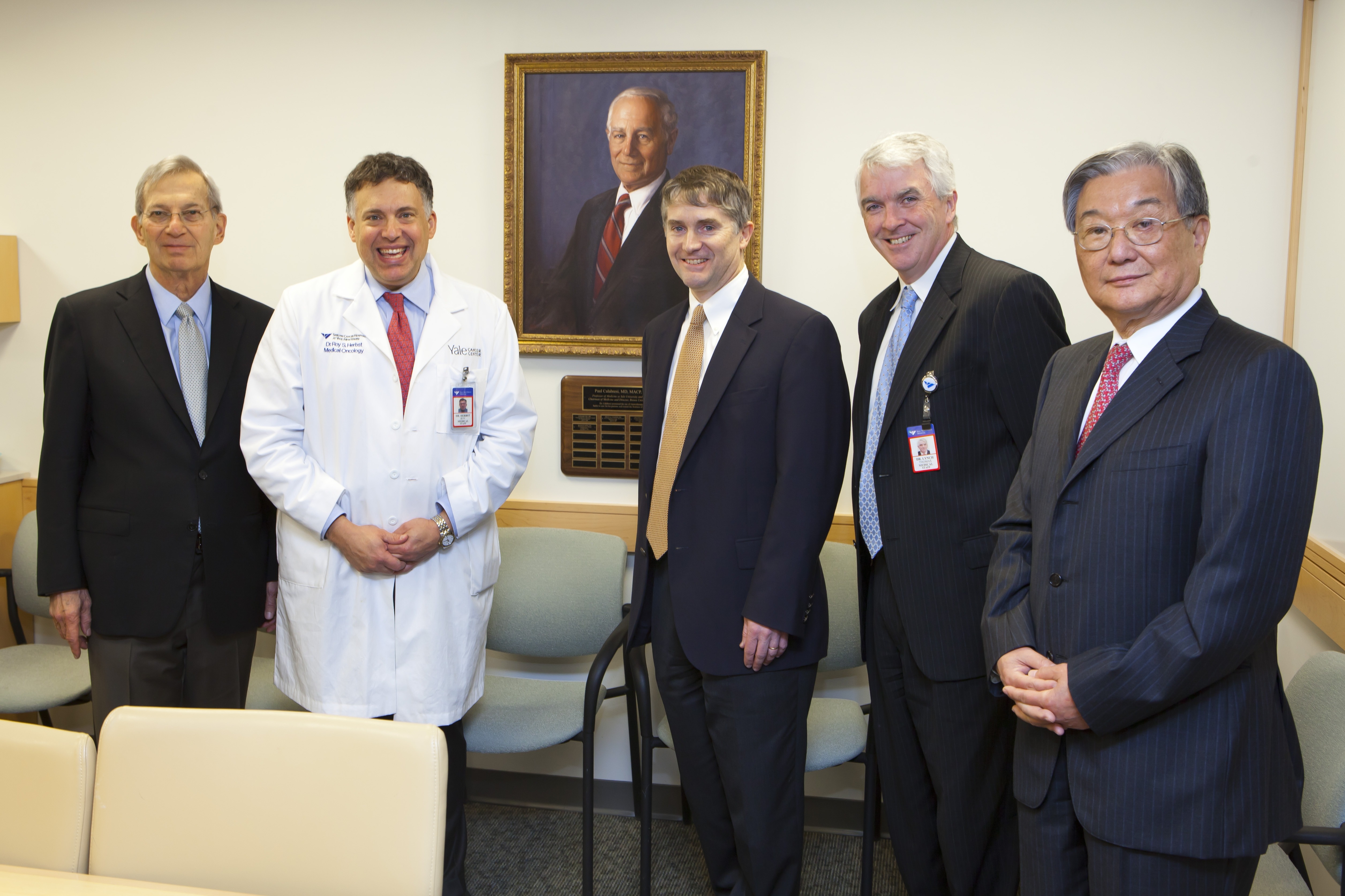 Though he has departed, his findings will continue to help those patients for years to come, including his groundbreaking innovations in the treatment of locally advanced head and neck cancer, precision medicine, chemoprevention, and targeted therapy. Just think about how lung cancer treatment has changed in 20 years with the advent of targeted therapy, precision guided biopsies, and immunotherapy, thanks to his leadership.

I first met Ki Hong when I was a young fellow from Boston and I interviewed for faculty positions at MD Anderson Cancer Center, in Houston. I had previously heard Dr. Hong give his American Cancer Society Award lecture on chemoprevention and I asked to meet with him during my visit. Though, originally, a position in the Department of Thoracic Head & Neck Medical Oncology (THNMO) was not available, when we met, we immediately “clicked” and realized that we would want to work together.

After that, he very fortunately created a position for me in THNMO, and I made the move to Texas where I had an outstanding 13 years of my career (and also met my wife there with some help from Dr. Hong).

Ki took me under his wing as a mentor, and what an amazing mentor he was. I remember Fadlo Khuri and I would meet with him most mornings at 6 a.m. or earlier—there was a bit of a competition between Fadlo, Ki and I regarding who would get in first; of course, Ki always won.

Ki was the hardest working person I ever met. During those early hours, we would have time with him to discuss our projects, our protocols, and grants that we were writing. In such an impeccable way he taught us how to effectively and meaningfully write grants, pull programs together, and build multi-investigator teams from the lab to the clinic.

He embodied translational research at its very best. He would take us with him to meetings, put us on editorial boards, and send us to meetings in his place (always with advice on how to proceed), not because he was too busy, but because he wanted us to be invigorated and inspired by innovative ideas.

I was always so impressed at how he would look to all of the fellows and young faculty especially to help nurture our careers and ensure our long-term success. In this vein, the training programs at MD Anderson thrived under his leadership and he was integral to enhancing and building the already strong fellowship program. Truly an amazing individual.

Ki was our General for the BATTLE Program, the biomarker-integrated targeted therapy for lung cancer elimination trial. During my tenure as the lung section chief at MD Anderson, it became obvious we needed a more precision-guided approach to lung cancer treatment.

As such, Ki, as only he could, brought together our entire team to work together: pathologists, radiologists, oncologists, surgeons, basic scientists. Together we changed the way we treat lung cancer at MD Anderson by using biomarkers to guide treatment decisions. This was the BATTLE Program. It was the future for so many of today’s master protocols such as Lung-MAP, NCI-MATCH, ALCHEMIST.

The specimens generated from the BATTLE Program also helped in the investigation and development of other novel targeted therapies. Ki guided this team of many different personalities and people, a family. He respected all members on the team and believed in the ability of everyone to work together. This is Ki’s legacy, to build teams, to attack difficult problems, to inspire, to encourage, to be determined.

Finally, of course, his true love was patient care—for Ki, it really was all about the patients. He was such a sensitive and caring physician, patient care always came first.

In my early career, I witnessed first-hand his interactions with countless patients who would see him from all over the country; in fact, all over the world. People would come for his expertise in lung cancer and head and neck cancer, and he would care for those patients at MD Anderson with such compassion and precision as only he and that institution could. Each patient received the most comprehensive care, which included enrolling them onto a clinical trial protocol when applicable, and then remaining always available to them for follow-up.

Ki loved sports and he used sports analogies in patient care. He always wanted to put points on the board, make the first down, make some progress, raise the bar, and that progress was for the patients. We must do better, we must make more than just incremental progress, and he constantly pushed the limits. 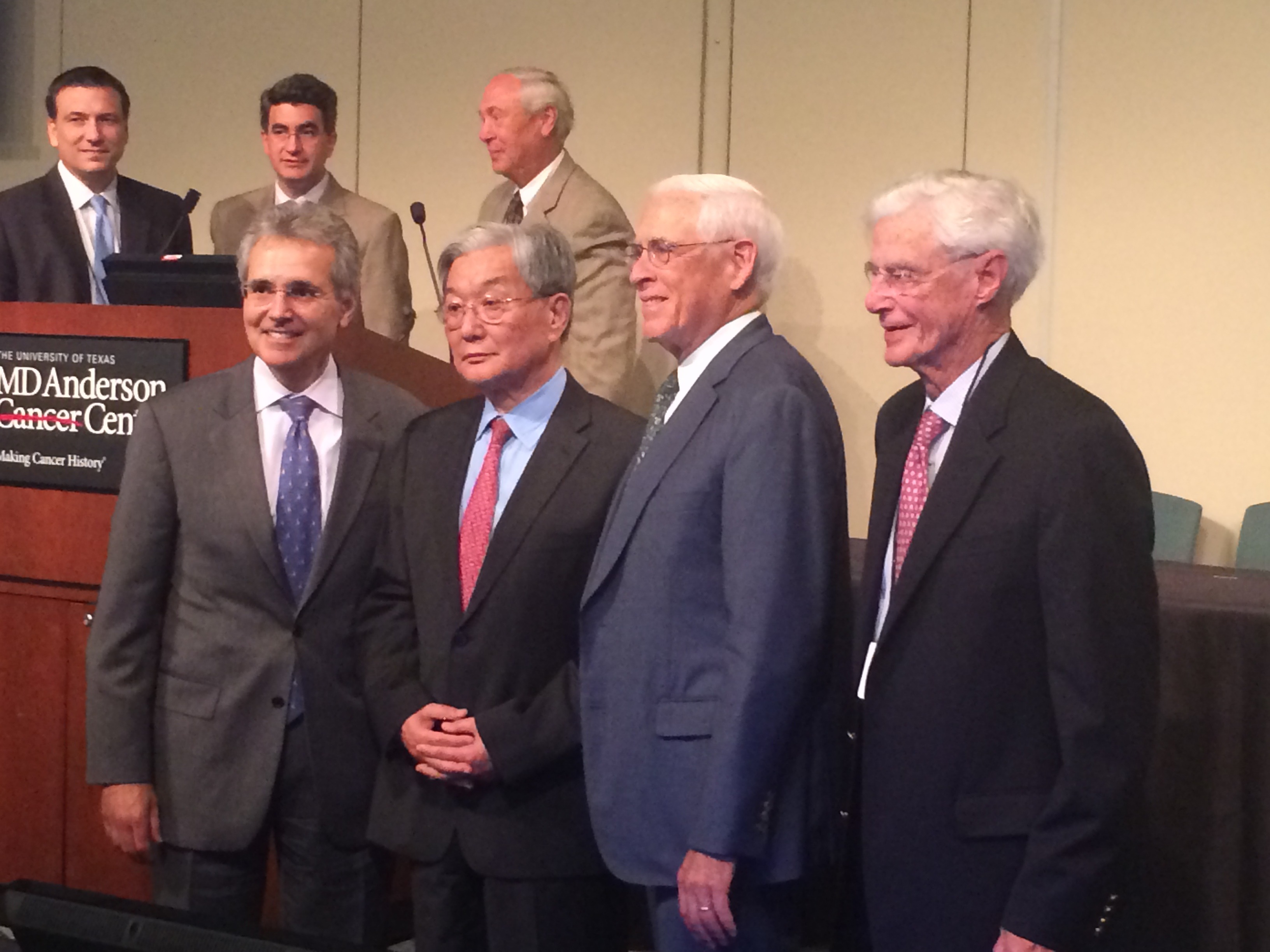 Waun Ki Hong with the three MD Anderson presidents he worked with: Ronald DePinho, John Mendelsohn and Charles LeMaistre. The photo was taken in Aug. 15, 2014, at the presentation of the Festschrift in honor of Hong’s retirement from the cancer center.

When I left MD Anderson to become the chief of medical oncology at Yale, Ki encouraged and supported me. He remained my mentor and friend and we would talk quite often—he would call to check on me and I would call him for advice on management, grants and life. As I built my program, he was a close advisor.

He came to Yale to give the first Paul Calabresi grand rounds in 2012 and spent time with me, Tom Lynch, Vince DeVita, the Calabresi family (Ki, as was I, was inspired by Paul and our department). Over time, he got to know my group, advised me on the development of our SPORE in Lung Cancer, which we successfully received, and would constantly check in to see how I was doing. Consequently, I would visit him and his colleagues in Houston at least two or three times a year and had the pleasure of seeing him at meetings and other events, where we he was always friendly, encouraging, and supportive.

The world will miss Ki Hong, and I will miss Ki Hong. My deepest condolences to his wife Mihwa and his sons Ed and Burt and his grandchildren. The only solace is that Dr. Hong’s legacy will live on forever and his legions of trainees will continue to go out and spread the work. All must think of the legacy of Ki Hong as we pursue rigor in our grants, ensure that we have the time to listen and mentor our trainees, and take time for ourselves and our loved ones.

The world has lost a truly exceptional human being, a leader, a thinker, an innovator, a team builder, and most of all, a great friend.

The author is Ensign Professor of Medicine, chief of medical oncology and associate director for translational research at Yale Cancer Center 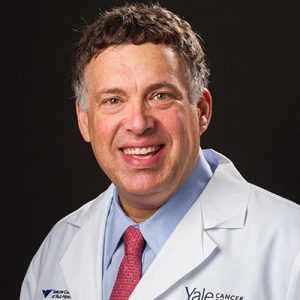