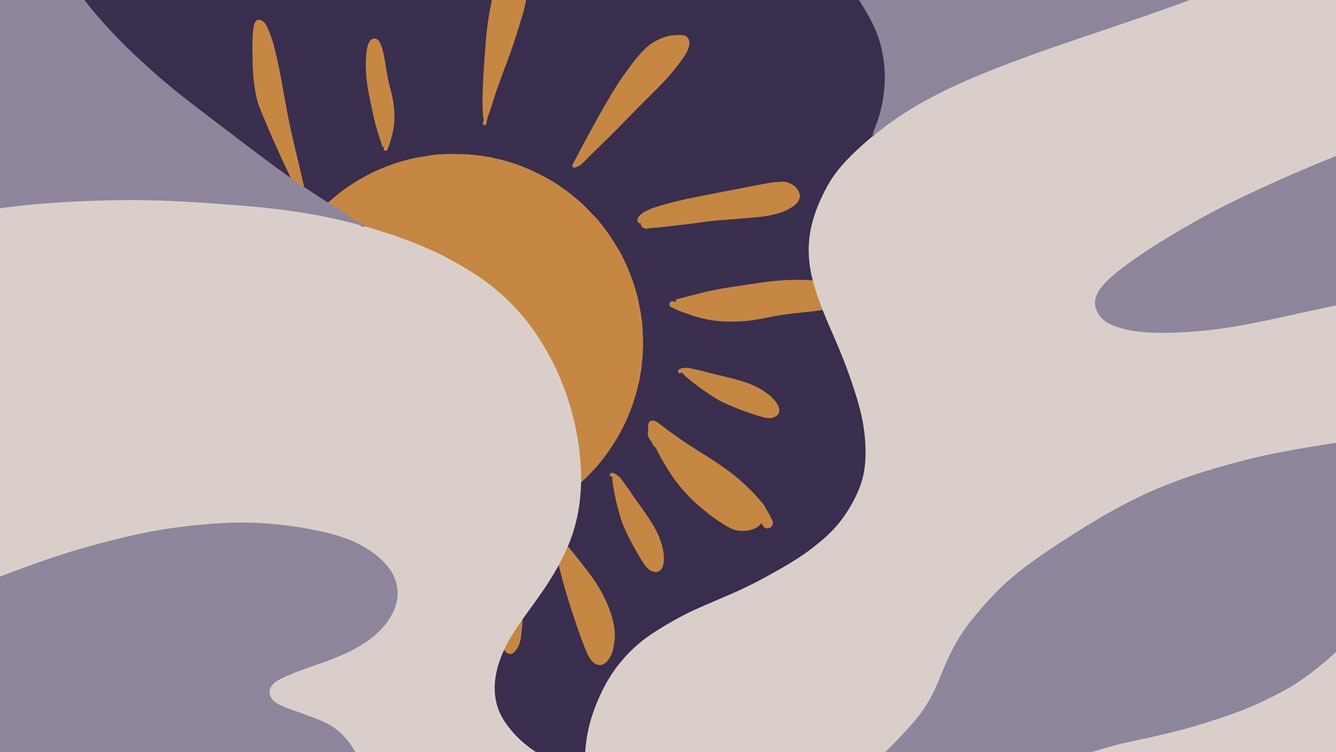 This story is part of The Cancer Letter’s ongoing coverage of COVID-19’s impact on oncology. A full list of our coverage is available here.

Earlier this year, as doctors observed that patients afflicted with the novel coronavirus were dying from a cytokine release syndrome, some suggested focusing on suppressing production of interleukin-6 to control this immune response gone haywire (The Cancer Letter, March 24, 2020).

Clinical trials were started, focusing on drugs approved in rheumatology, some of which are used to control cytokine release in CAR T-cell therapy. With COVID-19 spiking, the trials, which included the sickest patients, accrued quickly.

Then, in July, came a wave of bad news—the trials were not meeting their primary endpoints. Was it possible that IL-6 antagonists were a dead end, that the strategy was, well, kaput?

Genentech is a member of the Roche Group.

In a related development last week, Eli Lilly and Co. and Incyte announced a win in the National Institute of Allergy and Infectious Diseases sponsored trial of the JAK inhibitor Olumiant (baricitinib) plus remdesivir versus remdesivir in hospitalized patients with COVID-19. The primary endpoint of the trial, called ACTT-2, was reduction of time to recovery in comparison with remdesivir alone.

Genentech and Lilly said they will be presenting their data to FDA and other regulatory authorities worldwide.

“I believe that we can summarize all in few words: the right patient, the right time,” Paolo A. Ascierto, a melanoma expert at Cancer Immunotherapy and Development Therapeutics Unit, Istituto Nazionale Tumori IRCCS Fondazione G. Pascale, said to The Cancer Letter.

Carl H. June, the Richard W. Vague Professor in Immunotherapy, Department of Pathology and Laboratory Medicine, Perelman School of Medicine of the University of Pennsylvania, agrees.

“In April, we had no idea that dexamethasone would have the largest effect of any trial to date in lowering the hazard ratio for mortality of any drug. I still can’t figure out why after 30 years of trials with steroids in sepsis that were negative, this one was so positive,” June said to The Cancer Letter.

“I think the COVID trials with IL-6 antagonism have been flawed, because they tested oxygen-dependent patients, but they did not make elevated serum IL levels an inclusion criterion (about 20-25% of patients). If they had done that, then my bet is that IL-6 or IL-1 antagonists would be strongly positive in COVID. Most hospitals can’t do rapid turn-around tests for IL-6, explaining the flaws in trial design.”

Genentech’s most recent results are consistent with a University of Chicago phase II study of tocilizumab, said Mark Ratain, the Leon O. Jacobson Professor of Medicine, director of the Center for Personalized Therapeutics, and associate director for clinical sciences at the University of Chicago Comprehensive Cancer Center.

“The recent news regarding the positive results from the Roche’s EMPACTA trial and the NIAID ACTT-2 trial is very encouraging. In particular, the EMPACTA trial results are consistent with our own COVIDOSE data using much lower tocilizumab doses,” Ratain said.

“I also note that the published eligibility criteria for the Roche and NIAID trials did not require an elevated C-reactive protein (in contrast to our studies), which is now established as an important marker of COVID-19 severity, and is likely predictive for response to tocilizumab,” Ratain said. “Thus, the lack of apparent benefit in the Roche COVACTA trial (announced back in July) may have been due to inclusion of patients who did not have hyperinflammation, and therefore would not be expected to benefit from tocilizumab.

“Our ongoing COVIDOSE-2 trial aims to determine the optimal dose of tocilizumab in hospitalized patients, and future studies should evaluate the relative benefits of early administration of low dose tocilizumab and/or dexamethasone.”

Donald Berry, a professor of biostatistics at MD Anderson Cancer Center and co-founder of Berry Consultants, said he was able to discern tocilizumab’s efficacy in real world evidence.

“I was not surprised. Real-world evidence that we published in PLOS ONE provided a clue,” Berry said to The Cancer Letter. “We analyzed mortality of patients admitted to the ICUs of hospitals in the Hackensack Meridian Network, and we found about a 10 percentage point reduction in the risk of death for tocilizumab, 46% versus 56%”. 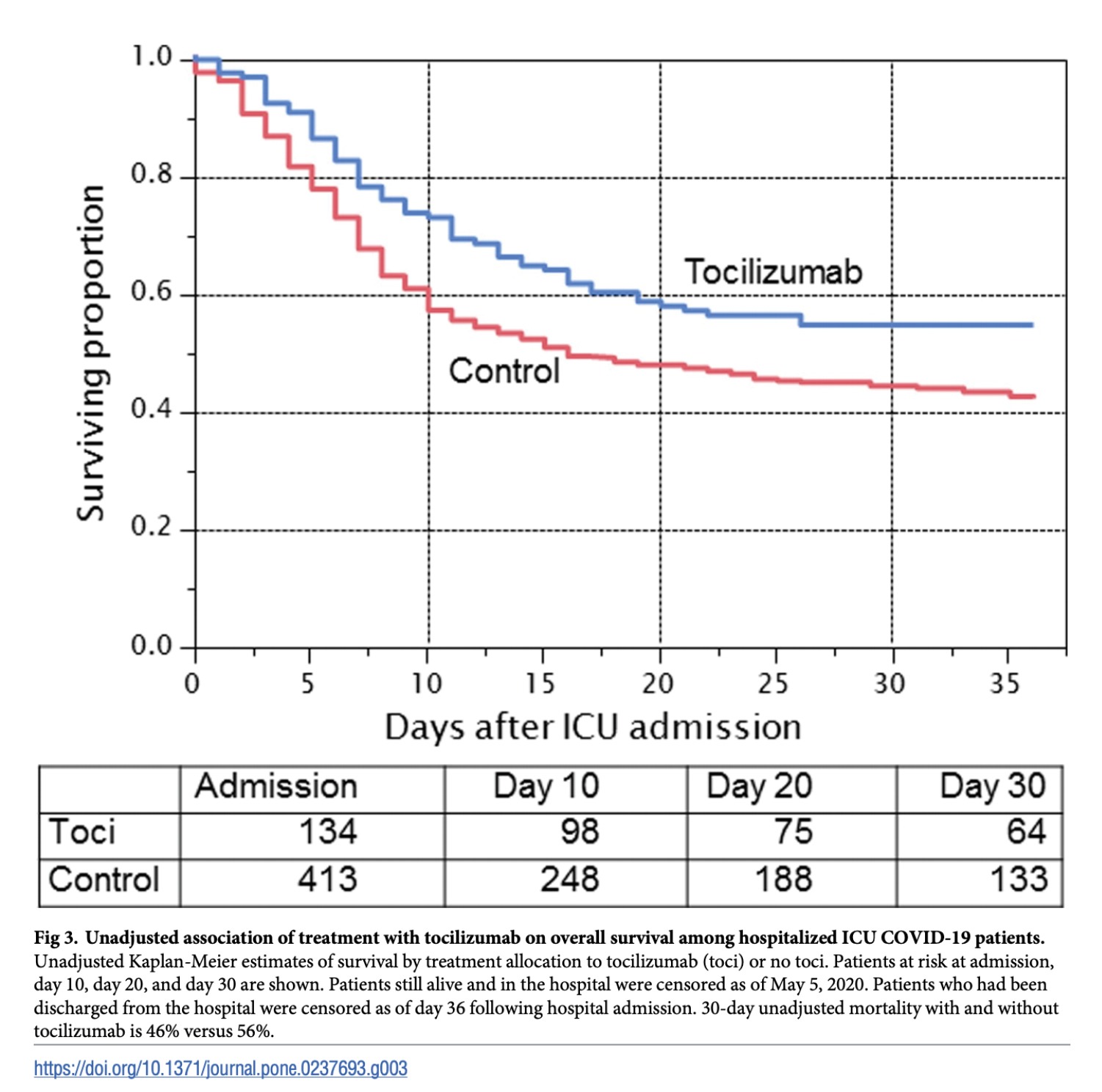 Tocilizumab is also being combined with remdesivir, an investigational antiviral drug that is now on the market in the U.S. under an Emergency Use Authorization.

Whatever happens, this treatment strategy—based on results of rigorous phase III trials—should inspire greater confidence than convalescent plasma, which received EUA based on phase II data, likely precluding the possibility of obtaining conclusive answers on safety and efficacy.

It’s known in oncology, too. Genentech’s tocilizumab, a drug approved in rheumatology and cited on the labels as the go-to drug for mitigation of CRS for both approved CAR T-cell therapies on the market: the Novartis agent Kymriah (tisagenlecleucel) and the Gilead Sciences agent Yescarta (axicabtagene ciloleucel).

Early in the pandemic, The Cancer Letter asked Rachel Humphrey, an immuno-oncologist, to separate what is known from what is unknown and what is believed to be true (The Cancer Letter, April 3, 2020).

This is what Humphrey, chief medical officer of Black Diamond Therapeutics and lead singer of The Checkpoints, a blues-rock band of immuno-oncologists, said about the role of cytokines at the time:

Genentech has been persistent in its efforts to develop tocilizumab for the COVID-19 indication.

The company started a series of clinical trials of tocilizumab, but encountered a setback in late July, when its COVACTA trial failed to meet its primary endpoint of improved clinical status in patients with COVID-19-associated pneumonia or the key secondary endpoint of reduced patient mortality.

“We will continue to generate evidence to provide a more complete understanding of Actemra in COVID-19 associated pneumonia,” Levi Garraway, chief medical officer and head of Global Product Development at Genentech, said in a statement at the time.

NCI launched a compassionate use protocol for tocilizumab in cancer patients with COVID-19 (The Cancer Letter, April 10, 2020).

However, bad news from COVACTA prompted the institute to suspend its single-arm study on Aug. 6.

“At this point, we do not plan to develop sarilumab further for COVID-19,” a Regeneron spokesperson said to The Cancer Letter.

The IL-6 hypothesis was put back in play when Genentech announced that the phase III EMPACTA trial has met its primary endpoint, showing that patients with COVID-19-associated pneumonia who received tocilizumab plus standard of care were 44% less likely to progress to mechanical ventilation or death, compared to patients who received placebo plus standard of care (log-rank p-value = 0.0348; HR [95% CI] = 0.56 [0.32, 0.97]).

According to Genentech, the cumulative proportion of patients who progressed to mechanical ventilation or death by day 28 was 12.2% in the tocilizumab arm, compared to 19.3% in the placebo arm.

“The EMPACTA trial demonstrated that Actemra can reduce the need for mechanical ventilation in patients with COVID-19 pneumonia, an important outcome in this serious disease,” Genentech’s Garraway said in a statement. “We plan to share this important data with the FDA and other health authorities around the world.”

The trial’s name stands for Evaluating Minority Patients with Actemra.

According to Genentech, EMPACTA was the first global, phase III COVID-19 clinical trial to primarily enroll patient populations that are often underrepresented in clinical studies and have been disproportionately affected by the COVID-19 pandemic. Approximately 85% of the 389 patients enrolled in the trial were from minority racial and ethnic groups.

EMPACTA was conducted in the U.S., South Africa, Kenya, Brazil, Mexico and Peru.

“We have been striving to improve inclusion and diversity in our trials,” Jamie Freedman, head of U.S. Medical Affairs, said in a statement. “During the COVID-19 pandemic, we saw how high the stakes were for many communities of color and made diversity the centerpiece of this trial.”

A summary of EMPACTA findings follows:

According to Genentech, tocilizumab is being evaluated as a treatment for COVID-19 associated pneumonia, including in combination with an anti-viral in the phase III REMDACTA (NCT04409262) clinical trial that’s being conducted in collaboration with Gilead Sciences Inc.

The NIAID trial that compared baricitinib plus remdesivir with remdesivir as a single agent in hospitalized patients with COVID-19 has met the primary endpoint of reduction of time to recovery in comparison with remdesivir.

This finding was statistically significant, Lilly said. Observers say that a one-day advantage is an underwhelming result, but it does provide a proof of principle.

Recovery was defined as the participant being well enough for hospital discharge, meaning the participant either no longer required supplemental oxygen or ongoing medical care in the hospital, or was no longer hospitalized at Day 29. The study also met a key secondary endpoint comparing patient outcomes at Day 15 using an ordinal 8-point scale ranging from fully recovered to death.

“These findings from ACTT-2 are another step as we improve the care of these patients,” Andre Kalil, professor at the University of Nebraska Medical Center and a principal investigator of the ACTT studies, said in a statement. “These data may help us to better understand baricitinib’s potential role in the treatment of COVID-19.”

Lilly said it is supporting ongoing multisite and single-site investigator-initiated trials of baricitinib in Europe and North America for hospitalized patients with COVID-19 infections.

The question of dose

Even though drugs in this class are on the market for rheumatology indications, companies should make an effort to rethink the dosage that may be more appropriate to treat or prevent hyperinflammation triggered by COVID-19, UChicago’s Ratain said.

Ratain is a part of the group that conducted a phase II study of low-dose tocilizumab in hospitalized adult patients with COVID-19 who did not require mechanical ventilation. Pankti Reid, a rheumatologist and an assistant professor of medicine at UChicago, was the principal investigator on the study.

“Results of this trial and its correlative biological studies provide rationale for a randomized, controlled trial of low-dose tocilizumab in COVID-19,” the authors state in the paper they have submitted for publication.

“Our data demonstrate that a dose of 40-200 mg has benefit in severe COVID-19, and that there is no evidence that 200 mg is superior to 40 mg,” Ratain said to The Cancer Letter. “This strongly suggests that the dose being studied by Roche (8 mg/kg, up to 800 mg) is up to 20-fold higher than is necessary. Furthermore, given the potential risk of secondary infections with prolonged IL-6 blockade, lower doses may have a superior therapeutic index in severe COVID-19, since the duration of IL-6 blockade will be shorter.”

A randomized trial of low-dose tocilizumab is ongoing, Ratain said.