41-35 Baselga: Why I Believe NIH is On Threshold Of the Largest Budget Increase in 12 Years

Baselga: Why I Believe NIH is On Threshold Of the Largest Budget Increase in 12 Years

As congressional leaders discuss potential ways to avert a government shutdown, which could happen in less than a week if policymakers are unable to agree to a short-term continuing resolution to keep the government running beyond Sept. 30, I remain optimistic that NIH will receive its largest annual budget increase in 12 years.

After 12 years of flat funding, a significant number of members of Congress on both sides of the aisle are enthusiastically backing the NIH, which is the largest supporter of medical research in the world. Many in Congress, Republicans and Democrats alike, appear to be singing from the same song sheet about the importance of prioritizing the NIH budget.

Many are echoing former Speaker of the House, Newt Gingrich (R-Ga.), who pointed out in an op-ed earlier in the year that, “We are in a time of unimaginable scientific and technological progress. By funding basic medical research, Congress can transform our fiscal health, and our personal health, too.”

Lawmakers are also competing to one-up each other’s suggestions for boosting NIH’s budget. For example, in early February, President Barack Obama’s fiscal year 2016 budget proposal called for a funding increase of $1 billion for the NIH (a 3.3 percent increase to $31.3 billion).

Shortly after proposing this significant funding increase for the NIH, Chairman Blunt told attendees at an event at Washington University in St. Louis that he planned to make NIH funding a priority in his new position as head of the subcommittee. Also, he commented that he clearly understands the message he’s received from NIH Director Francis Collins, and others, “that the NIH institutes and centers require steady and sustained growth.”

However, it’s also clear that for the NIH to receive the increases that have been proposed by the President, House, and Senate, Republicans and Democrats must work together and agree on a broader budget deal to raise the sequester-imposed funding caps for fiscal year 2016.

This point is underscored when considering that the subcommittees in the Senate and House that are proposing these funding increases for NIH are also making significant spending cuts to many other programs in order to adhere to the budget caps outlined in the Budget Control Act of 2013.

Therefore, we are quite pleased to see that Democrats and the White House, as well as many Republicans, are strongly rejecting the sequester-imposed spending levels. Instead, many are pushing for another bipartisan budget agreement in the mold of the 2013 deal negotiated by then-Budget Committee chairs, Rep. Paul Ryan (R-Wis.), and Sen. Patty Murray (D-Wash.), which provided additional overall funding for many priority programs, such as the NIH.

This stance is consistent with the position President Obama took a few months ago when he wrote to the House and Senate Appropriations Committee chairmen to express opposition to the spending level limits and called on them to instead negotiate another bipartisan budget deal to raise the spending caps. In fact, in a bid to prompt such talks, President Obama has said he would not sign any fiscal year 2016 spending measure that adheres to the statutory spending limits.

As the founding organizer and lead sponsor of the 3rd Annual Rally for Medical Research Hill Day, the American Association for Cancer Research is trying to do its part to advocate for the NIH by joining with more than 300 organizations to sustain this current momentum for medical research and further inspire support for the lifesaving research that is funded by the NIH.

During his breakfast remarks to the participants, who were in town for the Rally for Medical Research Hill Day on Sept. 17, Chairman Cole suggested that should such a budget deal be reached, the NIH would likely receive an increase on the order of $1.5 billion in fiscal year 2016.

Of course, this would represent a middle ground between the House and Senate proposals and would be in line with the positive momentum we’ve seen NIH receive throughout 2015. And if this were to indeed happen, it would be the largest increase in annual appropriations for the NIH since 2003.

Cole’s parting message to the Rally Hill Day participants was that they “must keep the pressure on” and tell Congress that they must reach a deal that allows for additional funds for priority areas such as medical research.

Therefore, we have a wonderful opportunity to make a difference for NIH in fiscal year 2016, but as Cole pointed out, the American public must reach out to members of Congress to let them know that they should weigh in on this important matter. Specifically, we must ask them to prioritize NIH funding by providing robust, sustained and predictable budget increases

NIH budget increases will allow us to build on our nation’s prior investments in medical research; ensure that our nation is able to respond to emerging health and research needs; boost local economies; and train the future generation of scientists. Medical research has saved the lives of millions of Americans. Robust, sustained, and predictable funding increases will allow us to make quantum leaps forward toward improving the health of all Americans.

The author is president of the American Association for Cancer Research, and physician-in-chief and chief medical officer of Memorial Sloan Kettering Cancer Center. 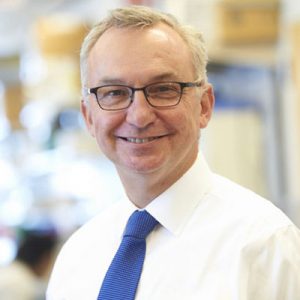